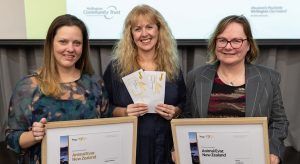 Animal Evac has taken out the Supreme Winner award at this evening’s Wellington Airport Regional Community Awards for Wellington City at an event at the National Library.

The awards acknowledge the contribution of voluntary and non-profit organisations to Wellington recognising those who are making a difference in our communities across the arts, heritage, and environment.

They are supported by the Wellington Airport, in partnership with Wellington Community Trust, Wellington City Council and the four other local councils.

Mayor Andy Foster says this event is a great way to celebrate the dedication and value of volunteers around the capital.

“I was particularly taken with Animal Evac and the work they did helping our neighbours during the disastrous bush fires in Australia last year. The scale of the disaster, and the heartbreak we witnessed, including the deaths of thousands of animals, was devastating.

“Animal Evac must have made a huge impact with the contribution they made by being there to support their counterparts in the most difficult circumstances.

“Volunteers contribute to the heart and soul of our city, without them Wellington would be a lesser place, so it’s important to shine a light on their incredible efforts.

“These awards recognise groups from across the board, all making an incredible contribution to improving the lives of others, advocating for animals, and protecting our environment.”

Formed in 2018, Supreme Winner Animal Evac has over 285 registered volunteers, and is the largest animal emergency response organisation in New Zealand.

Its mission is to leave no animals behind by assisting with the evacuation of animals during emergencies, and providing initial emergency shelter until alternative arrangements can be made.

Recently Animal Evac rallied its troops in Canterbury to support farmers whose stock were at risk during the floods in May, they were also there at the Nelson fires in 2019, and lent assistance during the Australian bush fires last year.

Wellington Airport’s Manager Brand and Sponsorship, Jo Maxwell says: “It’s great to be recognising all the wonderful ways community groups in Wellington City have been supporting their communities and risen to the challenges of the past 18 months.

“Congratulations to all the finalist groups and we look forward to the Wellington City award winners joining us for the regional Community Award finals later in the year.”

The winners were selected from over 100 nominations across the categories, with judges considering key factors including impact on the community, innovation and creativity, and effectiveness.

The award winners from tonight will represent Wellington City at the region wide awards ceremony later in the year.

Learn more about us.

Thank you for uploading the document